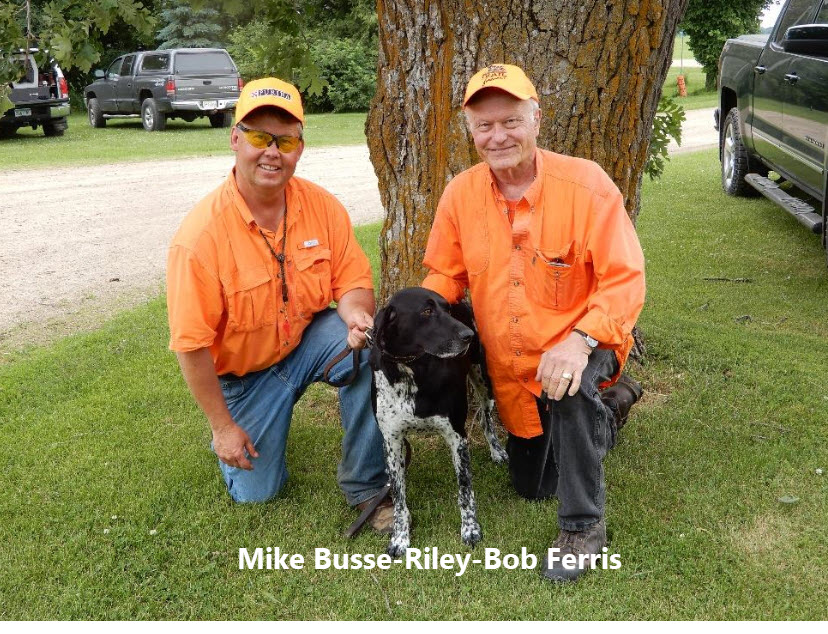 The MN Chapter of NAVHDA ran its 41st Annual Pheasant Championship on June 22nd at the Major Avenue Hunt Club near Glencoe, MN. The day began at 60 degrees, cloudy, and a nice breeze. By afternoon the temperature reached 67 with continued overcast, and a moderate breeze. A very pleasant day.

The north field had been burned this spring and the grass was fairly thin, although there were areas with thicker cover. The cover in the south field was noticeably heavier, but open enough that walking was easy and the dogs could be kept in sight. Each field encompassed approximately 18 acres.

The competition was close, with 5 teams each bagging 5 birds and only 11 points separating them. Bryan Thomas, Jake Goergen, and Banshee, in the 7
th group, scored 121 points which held up until Mike Busse, Bob Ferris, and Riley, in the last group of the day, also scored 121 points. In the ensuing run-off (20 minutes with no additional birds planted) Team Busse edged out Team Thomas with 2 finds to take 1 st place which earned them $315 in prize money. Team Thomas earned $135 for their 2nd place effort.

I would be remiss if I didn’t comment on our good friend, Bob Ferris. Bob has been a faithful competitor in this event for many years. He has never been one to make excuses or let the small matter of age keep him from participating. This year, at 75 years old, not only did he partner with
Mike Busse twice, but he also answered the call for the 20-minute run-off immediately following his run in the last scheduled team of the day. His efforts were instrumental in helping Mike secure another 1st place finish.

As is customary, the first 6 places each received a handsome solid walnut plaque, and the top placing teams, beginning with 3rd place, made selections from the prize table for their efforts.

At this year’s event, 66 pheasants were released for 10 teams and 37 birds were harvested. This is a 3.7 bird average per team, which is up slightly from last year when the average was 3.2 birds per team. 2011, with 4.9 birds per team, remains the high-water mark for harvest ratio at our Pheasant Championship on the Major Avenue grounds.

Thanks to all who entered their dogs in the event this year. In addition to many of our long-time participants, we enjoyed the company of 3 first time competitors.

In addition, thanks are in order to Myra Martin of Major Avenue Hunt Club for allowing us access to these excellent grounds and club house. She also offered a delicious lunch for us. This is the 26th consecutive year this contest has been held on these grounds and may be the last. Major Avenue has been sold, and we’re uncertain if the new ownership will be agreeable to having us run the Pheasant Championship on their grounds.

Special thanks to all the workers who volunteered their time to make this event possible. We often have the same workers from year to year, but this year was somewhat unusual in that we had 2 first-time judges and 5 first-time bird planters. All these new workers did an admirable job and the event ran without a hitch.  A drawing was held for the workers for a $50 Cabela’s gift card. Matt Walvey, who planted birds, was the lucky winner.

RESULTS OF THE RUNNING