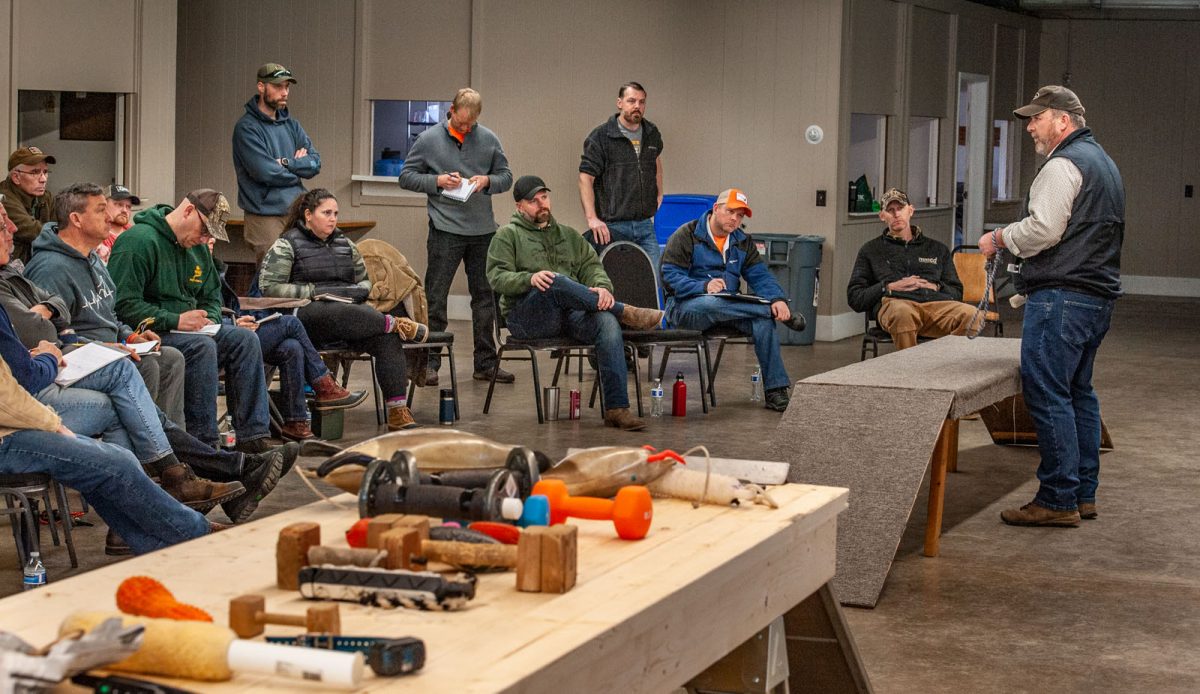 If you’ve been in NAVHDA and have had a dog older than a puppy, you’ve probably heard the question, “Have you force fetched your dog?” FORCE FETCH.  Yikes – sounds scary, eh?  Ok – then let’s just call it “Trained Retrieve”.  Better?  But you say, “My dog is already a natural retriever”, right?    Your dog also loves to run to see you, but still you teach him “Come”. Your dog will naturally lie down on a mat, but yet you teach them the “Down”, or “Place” command.  If you don’t teach them the command, then you have no command to enforce when they might not feel so inclined.  So, it goes with training retrieve.  When the day comes (and trust me it will), when they don’t feel inclined to retrieve something to hand, you’ll have no command that says to them “You Go Do It NOW!”  This simple task becomes a foundation for so much of what we do with our dogs in NAVHDA. On Saturday February 8th, Minnesota NAVHDA was privileged to have Mark Whalen come here from Poolesville, MD, to put on for us a Force Fetch Clinic.  Mark is a Senior NAVHDA Judge, and the Director of Judge Development for NAVHDA International.  After seeing Mark’s clinic, it suddenly doesn’t seem so scary anymore.

In attendance were 25 NAVHDA members, 15 of whom had their dogs.  Mark walked the participants through the entire process, beginning with teaching the command “Hold”, working to “Fetch”, and continuing to finish the process to clean, reliable retrieves.  While this process varies with each dog, his technique will take most dogs about 12 weeks, making this an ideal activity to do during the winter months, especially since during this process the dog also gets no field work or live birds.  In attendance were dogs at different places along the force fetch timeline, who were able to learn and demonstrate the progressions to the next step. Mark emphasized mechanics – keeping the basics simple, clear and consistent, and being a stickler in the precision of handling.  He showed the overlaying of commands and technique, including introducing the e-collar into the process.  He explained the use of pressure, and how the dog learns to release the pressure.  Note to the guys out there:  it was notable that the women in the class had a distinct advantage over the men – their use of lavish praise in a high encouraging voice was far more effective than us guys grudgingly giving a low toned, gruffly delivered “good dog”! While he prefers to do this after the dog has had its first hunting season, he also pointed out that it’s never too late – this can be done with an older dog.  (Old Dog handlers also learned a thing or 2 at the clinic.)  Odds are, you’ll be overlaying to them a command for something that they already do, making it enforceable, and ensuring that the dog finishes the retrieve to hand.  (Given the way that I shoot, that’s a must to keep the cripples from running off if the dog drops it!).

Many thanks to Mark Whalen for coming here to work with us.  Given the length of our winter here, we might as well do something productive now with our dogs, right?